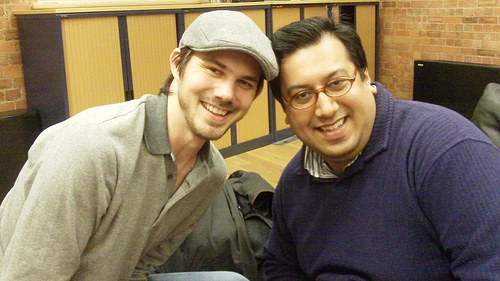 The above photo was a long time coming. That was last Friday when finally, after 9 months since we first attempted to meet, Farhan and I finally shook hands. It’s an interesting thing, this photo, and it ties together a few thoughts I’ve been having over the recent weeks on People-to-People which I’d like to share.

When I take on interns, one of the first lessons I teach them is about containment. I set them the challenge of fulfilling a seemingly impossible task, which I use to illustrate the point that you don’t have to able to do everything, you just need to know the people who can do it for you. I then teach them the real and more valuable lesson, that knowing that person is in fact the real joy, because our tasks and goals always change, but relationships can stand for a life time.

Secondly, People-to-People is both public and private. We need both, and must do both. An open Twitter discussion must become a private skype video call, and vice versas. Private contact creates intimacy, depth and a wealth of synergy that can then be used in a public arena to add value to others.

Privacy is also about loosing your need to brag, so that when you are in public, you actually focus on the public and not on yourself. One of my favourite quotes on this subject is from Ronald Regan:

There is no limit to what a man can do or where he can go if he doesn’t mind who gets the credit.

Boy, how much do we need that in Social Media.

Thirdly, People-to-People is about building, not bulldozing. Earlier this month I learnt that people find it easier to publicly criticism than privately collaborate. It’s easy to point fingers and bulldoze in the open, but it’s hard to build in private where no one can see to praise you. The people I’m working shoulder to shoulder with – we don’t brag – we quietly get on with it – and then people are amazed when they look and see the stature of what you have built. Like I said above, we need that private connection – the deeper the foundation, the taller and longer lasting the building.

Finally, People-to-People has purpose. Later today you can watch over on the Like Minds Blog a great 10 minute interview that Glenn Le Santo took with Charlie Osmond. Charlie is a highly successful young entrepreneur, and when I met him last week I just picked up the vibe of ‘purpose’ the whole time. Like Charlie says, it’s not about the money, it’s about the purpose.