And, as we will see, the circular motion is made of the three processes: Scatter, Gather and Matter. 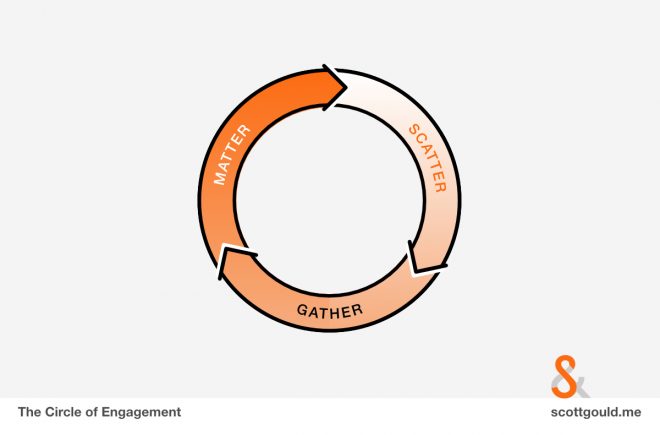 Scatter is the beginning of engagement, the outbound part where someone or something puts out a message. Gather is about how people then respond to that message. Finally, Matter is about taking what has from gathering, and turning that into a lasting resource.

The Matter process then feeds back into the Scatter process, the same way that the seed is in the fruit in the farming analogy above.

These three processes, Scatter, Gather, and Matter will be a constant thread throughout each framework because they are how all engagement happens, whether it is with communities or customers, whether it’s personal or professional, and even down to the way you’re interacting with this webpage, right now.

But first, to explain it, here’s a story:

Once upon a time a farmer sowed some seeds into a field. The farmer wanted to feed both his family and the village. So he took his bag of seed and began scattering it in his field. Some seed fell by the rocks, some was eaten by the birds, and some couldn’t stand the elements. But that didn’t matter, because some fell on good soil, and it grew roots, matured and eventually produced a large harvest. When the crop was ready, the farmer took his sickle and began reaping the harvest, gathering into binds as he went. After the harvest had been gathered, it was prepared and taken to the market. There the villagers could take it to make meals for their families, just like the farmer did for his own family too. The farmer has created something that mattered to people. And finally, when everyone was fed, there was seed left over from the harvest to start the process again…

Or consider a conversation: once upon a time Fred wanted to talk about The Beatles. But Sally wasn’t really interested. However when Fred happened to change the conversation to literature, Sally lit up, and they had a really engrossing, participatory conversation. Little surprise, then, that the next time they got together, Fred didn’t even think about The Beatles: they picked up where they left off talking about literature, but this time about they focussed on The Lord of The Rings, as Sally was currently reading it. And so the process continued…

Or finally, imagine a new website that wanted to have pictures of college students, but the students wanted it to be more than photos, they wanted to include updates. So the website allowed people to make updates. But then the students had friends who weren’t students who wanted to use the website. So they let those people have profiles and make updates too. And each time someone new signed up, they could invite their friends to the platform. And on the process went…

I’m sure you’ve got the idea here. You’ll likely recognise the biblical origins of the first example, no doubt see yourself in the second example at times (whether you’re a LOTR fan or not!), and I don’t need to tell you that Facebook is the third example. These examples describe the Circle of Engagement and the three inexorable, irreducible, irrefutable processes that comprise it.

The Five SPURS of Engagement