This is my review of The Slight Edge by Jeff Olson. I’ll be looking at it’s overall message, and picking out the points that were most relevant to me, in the hope that we can spark some discussion off of that. 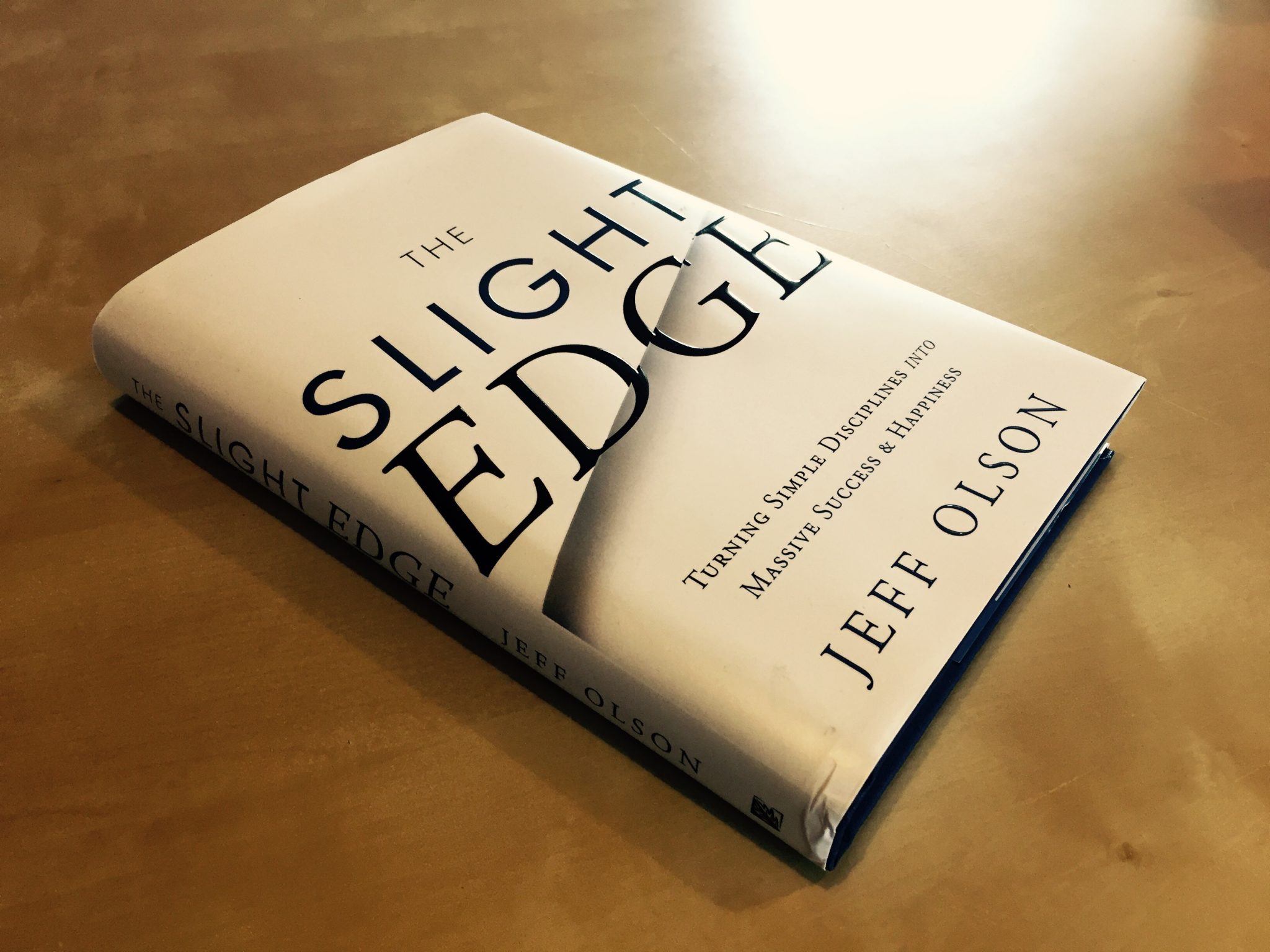 In late 2015 my friend Robert Clay told the participants of the first Ampersand Club a story about a father who has two grownup children. He offers them both a choice: have a million dollars cash today (hey, he’s American), or have one penny, but the value of that sum will be doubled everyday.

As you can might guess, one child takes the million and it destroys him/her, whereas the other takes the one penny, and by day 30, they have become a millionaire many times over.

The Premise of The Slight Edge

In a nutshell, The Slight Edge is over a 250-page exhortation of the power of making small decisions that accumulate over time into a significant difference, just like the story above.

This is illustrated by the below illustration, that appears regularly throughout the book: 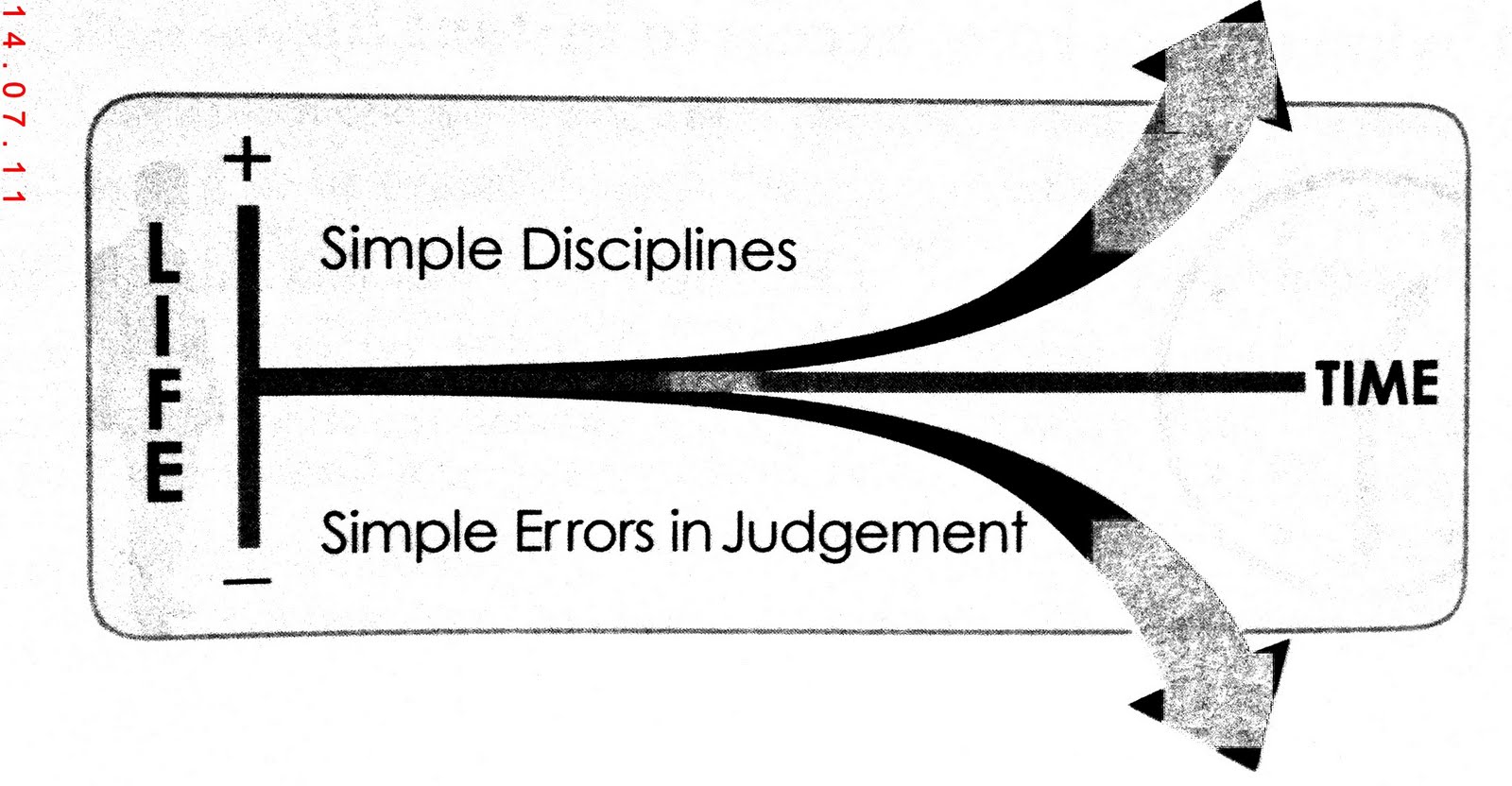 Olson makes this practical with the following examples:

You get the point. Thus, the most basic application of this book can be summarised thus: “Keep doing what is good for you, day in, day out, even when you don’t see any difference, because it will eventually come in the end, and when it does, it will be significant.”

The way this works is through time, and being consistent over time. He says “life is not a clickable link”, a very pertinent metaphor to a digital world that expects things to be immediate.

Normally, we see time passing as a bad thing, but Olson says,

There is a natural progression to success: plant, cultivate, harvest — and the central step, cultivate, can only happen over the course of time.

I like that. This has been one of my main takeaways. Normally I feel like time is against me, but this has flipped my mind into seeing time as my ally now.

For instance, as a consultant, I am always working on leads. It would be easy to see time as frustrating — “why won’t they get back to me” — however, now I can view time as an asset. While I waiting for this person to get back to me, I let time work on them, taking the material I have provided (and will continue to provide), and working it down into their thinking.

You can’t be static

Another idea Olson posits is that because the universe is in constant change, one cannot stand still. You are either progressing, or declining, but you are never just hovering in the middle.

Thus, the slight edge again is about that daily routine, quite literally, that slight amount of effort that sets you apart.

Personally, I’d rather have a day off every now and then, but I do recognise from my own life how great I feel when I am at the gym regularly, for instance, or eating well everyday.

Another point on not being static is that your goal will always end up being different to what you think it will be. So, given that you spend most of your time actually “off-target” for your goal in one sense, learn to be content with moving rather than perfecting.

There’s a lot more in this book, although if you’ve read your fair share of self-help books, much of it won’t be new, and accordingly, I skim read much of this. However, when I slowed down to take in a section, I still found it enjoyable and a pertinent refresher if nothing else. If you are new to self-help / business books, this could quite change your life.

On the negative, there were some parts of the book I was uncomfortable with, but that is more to do with my aversion to gurus. Otherwise, I’d rate this book highly. It’s not as snappy as something like Eat That Frog, but it is enjoyable none the less, and does have some real nuggets that bring down the veneer of success some self-help books like to present.