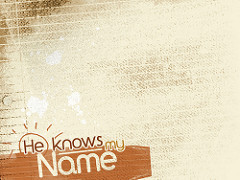 I love this blog. I love the comments that you, the participants, bring. Last week’s post on What I Learned From Chris Brogan contained some exceptional comments that were full of value and utility.

One particular thread was very insightful, along the lines of remembering people’s names. As I said, it’s something that Chris did really well, and I’m making sure I’m as good as I can be at. You can’t underestimate the power of knowing someone’s name. In fact, one person even said the most important word in the world to anyone is that person’s name.

I just wanted to pick out a few practical tips:

The technique is a variation of what Chris has described. I take a sheet of paper and draw a simple map of where everyone is sitting. As they introduce themselves, I pay attention and write their name in the right place on the plan, and then one or two words of what they have said. Like Chris, I look at the people when they are talking, and just focus on the content instead of making judgements about it.

Once I have my map, during the early part of the meeting, I let my eyes go round the room, saying the names of the people in my head as I look at them. In the first half an hour, I make sure I do this a few times. Then, I play a little game and look at people at random, to see if I can say their name in my head.

The result is that when I do speak, I can remember who has said what and relate my contribution to theirs so they feel included. I come across as a much better person than I really am (I’m just as self-obsessed as the next person.)

* I look directly into your eyes when getting your name… AND/OR
* if I’m meeting you in person for the first time, but know you from the web, I double-up on my memory of you by looking into your eyes and saying your name as I greet you.
* I I repeat your name a few times, and make sure that others around me have met you. This lets me repeat your name.
* I store the moment as best as I can by not allowing my head to be distracted with other details. I try to shut out all the “what next” bits.

One of the best techniques I ever found for remembering something is close deletions. So to remember that term I’d write “To remember things I use […] deletions”

Then set that as a reminder for 3 days time. Just as you’re about to forget, something like that hitting your subconscious buries it in. Our brains are ‘use it or lose it’ lumps of elastic learning capability.

I’ve always focused on this too – remembering people’s names, their partners names and interests is incredibly important – as you say, it shows you care. Chris does this on a new level and has made a big impact on my life since meeting him at Likeminds earlier this year.

Me? I introduce the person I’ve just met to someone else. Saying their name out loud is better than saying it in your head, and I can then link your name to the memory I have of introducing you to someone too.