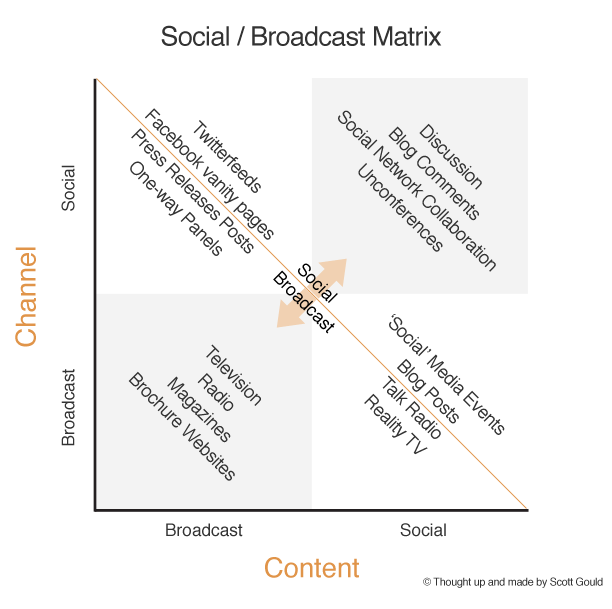 Being true to the form of curation, I’d like to point you to two great posts from this week. First is Loic LeMeur’s post on “The end of the traditional campaign = reach model“, in which he talks paid vs earned media and a few other things. What the post and his video both come down to is the misuse of terms and the confusion that is created by the melange of ideas around Social Media.

Next up is Olivier Blanchard’s follow up on Loic’s post, which in true Olivier fashion is entitled “What silly words say about people who use them“, and looks closer at some of the language and confusion that he have going on. One issue is with the idea of Social Media and Mobile being “emerging medias”, which Olivier deals with accordingly (“emerging” describes a state of adoption, not a type of media, and neither of their are emerging anymore, they are in mass adoption.)

Unfortunately, I’m not following up with a video, but I did want to remind us of the Social / Broadcast Matrix and how it helps us clarify media types, the language we use, and gives us a framework for understanding where we’ve come from and where we are going.

Social as a Consumer Mindset

The mindset that as a consumer, I have a say in media – by calling in, doing a phone vote, writing letters, the ability to be in the programme – has been a dominant consumer mindset for the last ten years now, especially since Reality TV exploded after the first Big Brother in 1999. This relates to the content of the media being social.

The most predominant social channels, the mobile phone and the internet, also gained such dominance around the same time, marking the 2000s as the turning point from broadcast to social as a mass consumer mindset.

Social is the opposite of broadcast, and the product of a post-modern epistemology. In other words, our knowledge does not come in a top down format, where knowledge is pushed out to us from a single, absolute, one-way source that then forms our opinions and informs our lifestyle.

Instead, we have a web of knowledge – a multi-way structure were we are pulling information and pushing information out from various media nodes, each of us ourselves adapting this information as we receive and then re-emit it.

Example: the recent Leadership Debate in the UK General Election. As the three main parties were on TV, debating and doing what politicians do best, people were researching policies and checking facts on Google (see this) and debating the issues themselves on Twitter (see this). This would never happen under broadcast, and indeed, it couldn’t.

I’ve only really presented a few ideas here and you’re expertise could flesh them out a lot more. If you’ve watched Olivier and Loic‘s videos, then I’m keen to know: