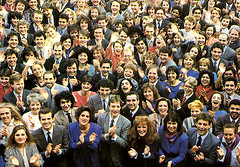 I wrote on Saturday about The Fight Our Youth Face, discussing the problem that too much choice for our young people has a paralysing effect, and that there isn’t a strong focus on transferable skills.

We talked a while ago about ‘building the kingdom’ – looking at how a strong team is made up of individuals who strongly compliment one another. This is the type of thinking that I’m saying our youth aren’t getting so much of. It requires putting down your ego, and making others kings instead of yourself – being a kingmaker. Contrary to this, most young people want to be the king. Hey, I did, you probably did too.

My concern is, however, that the ‘be the king’ message is way out of hand, and I think it most subtly appears in the whole personal digital brand movement.

What I mean by this is that there is an inordinate emphasis on image and being ‘the social [insert area] guru‘, complete with logo, branded blog, branded avatar, slogan – and then complete lack of actual work. The idea of beefing yourself up is something that Jim Connolly is actually debating right now and is well worth getting in on the discussion.

Again, I’ve been here and made this mistake MANY times. For years I had the issue of having a better logo than actual business, and for years I made myself look bigger than I was. Thankfully, I’ve grown and balanced out somewhat through the mentoring of you guys and others.

But many young people lack this mentoring, and to be honest, we so focus on content online that it makes sense that it would be there starting point, rather than actually creating substance. It seems following is more important than delivering.

What Young People Say About The Myth

I want to share two good pieces on this to get our mind juice flowing a little. The first is from Daniel Agee, who wrote “Make Me King” recently:

I have a photographer friend who is determined to be the most well known photographer on the face of the globe. He is underselling workshops and speaking at as many conventions as he can. He is getting his name out there with abundance. He’s been turning down actual photography work to speak about his photography.

The problem is, his photography is mediocre at best. Where he shines is the experience his studio offers. While he is fighting to show how great he is and how much he can help others, he’s killing his own studio. By no longer walking the walk, he’s become an annoying bastard that must likes to talk about how great he can make your studio. His priorities are shot, and if he’s not careful, it will kill his business.

Instead of being the best, he’s trying to show he’s the best.

These people are too concerned with being king. One day, they’ll realize being king isn’t what’s important. It’s about making a kingdom worth being king of, not making yourself king.

Moreover, I am discovering that the internet is really round and there is almost an incestuous circling of the same old people, again, and again, and again. Like really? How about you (not *you*) step out of your comfort zone and perhaps change the flow. I do see it happen here and there and it is refreshing. I see you in that line of creating a new momentum. And when I do, I am a religious zealot trying to “convert” others unto these humans. But for the most part it is disappointing.

And you know what is most disappointing is this masquerading of “I can help you” which is really another way to sell your services, product, book, etc. Now, you may be saying, “Well, Annie, people have to make money. We can’t live in a free-for-all society.” I agree. But just keep it authentic. And if you “truly” have no desire to connect with another beyond the talk of the product (or “work”) then state that too. It’s okay.

I guess my biggest realization is how rarely people tap into the humanity of one another. This doesn’t mean one has to spill all their personal stories. Not at all. But here we have a medium like the world wide web, shouldn’t it be beyond a reflection of how “business as usual” is happening on Earth? Or am I right that it is just a reflection of how we function on Earth?