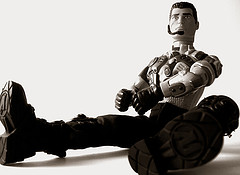 This on the BBC is interesting. It’s a short clip of delegates at TED saying what they think ‘what the world needs now’ in 18 seconds. They all hinge on action. But my favourite is from Arianna Hugginton who said beautifully that ‘we need greater simplicity.’

I’m trying really hard to get a mission statement together for Like Minds. I’ve tried ‘challenging thinking to change our actions’ which is too long – and ‘challenging thinking’ which is too vague. I tried ‘open source thinking’ which means we should be free (which we aren’t), and I’m tried ‘making ideas accessible’ which hinges too much on the ideas and not the delivery of those ideas.

Like I say, an idea that goes nowhere is just an ideal, and Arianna as well as others in that video echoed that we need less people complaining and bulldozing, and more people collaborating and building. That’s also the theme of this incredible talk by Jamie Olivier, who won this year’s TED Prize for his campaign to teach every child about food.

I’m beginning to think more about Like Minds as a place not of accessible ideas, but accessible actions. Yesterday we discussed how People-to-People enables us to engage more deeply with people – and I think that the purpose of that engagement should not be just conversation but action. Hence the photo of Action Man above.

Making ideas happen is the simplest and simultaneously the hardest thing to do. It only requires taking the next step – not running a marathon – but each step is surrounded by inertia from within and without.

I think that we need access to actions. Thats what Like Minds should be about, shouldn’t it? Joining people with other people who help us to make the next step.

I love the concept of the YesAndClub – a place where there are no ‘no buts’ and only ‘yes ands’ – where people think with possibility, and guide on another not on the basis of what you can’t do, but what you should rather do.

There is currently a big debate on Robert Scoble’s blog about TED and it’s price tag. Robert went under a press pass this year and has written rave reviews applauding it. And so he should – TED is awesome.

But I don’t agree with Robert’s parting remark, where he said “let’s figure out how to get more of you into TED.”

We don’t need more people at TED. More people at TED means less depth of connection. What we need are more people taking the same kind of ideas to places that TED will never reach – like the estates in my city where kids who my wife works with think that there is no life beyond their street – and provide them with access to actions.

What Do YOU Think The World Needs Now?