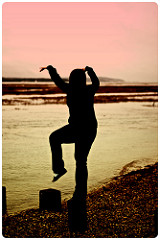 Jim offers a great idea. He knows it’s good, but unfortunately a lot of people just don’t quite get it and therefore aren’t buying it. Jim is frustrated day after day when he sees how his ideas could be used by people in his community, but because he can’t communicate it, and because the community aren’t sure of him, his idea isn’t selling.

In fact, Jim is a lot of people. Headfake marketing – the method of using one thing to teach another thing – is as old as, well, the Karate Kid. Remember Mr. Miyagi teaching his young student to ‘wax on, wax off’? By teaching him how to clean windows, Daniel actually learns to block punches. We can use the same techniques today when articulating the ideas that we have.

This mechanism is used a lot in sales. When people ‘sell through’ rather than ‘sell to’, they are pulling a mild form of this (you know, the old “You might know someone who needs this”, rather than saying “You need this” trick.) Or how about getting kids to eat food by pretending it’s a plane flying into a tunnel?

The headfake above means you are selling to someone while giving them a safe way to exit, which is generally more pleasant. But there’s more to it than that.

How To Wax On, Wax Off

The reason why you have to pull a headfake is because, unfortunately, when people are too familiar with you they often won’t learn from you. That’s why Jim (and the rest of us) get annoyed when people suddenly ‘get it’ when someone says what we’ve been saying for ages already. So here’s how to start going about it:

Randy Pausch carries out his famous last lecture here on the subject of “Achieving your Childhood Dreams.” What follows is an hour discussion on headfakes, before the final revelation that the whole talk is a headfake itself. It has passion, the magic curtain, stories, mindshifts, language and wholly converts the headfake into the idea.

I want to hear about the headfakes that you’ve pulled, and the best ones that you know of. Let’s get a list going in the comments.

Photo with thanks to tico24.