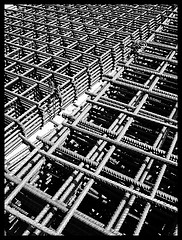 Over the last weeks I have attended a number of events/conferences in London, most recently including Jeff Pulver‘s #140Conf, where I got to dine with Jeff the night before with Daren Foysth and few other new friends. The next day, despite the lineup of experienced and innovating speakers, and the crowd of great people, I was mostly disappointed by the content that these speakers shared: there was nothing in it that had any kind of structure that I could take away and use – and it’s been the same at the other conferences too.

Note that these conferences were attended by existing Social Media practitioners – they weren’t entry level. This is important to point out, because some people made the same criticisms about Like Minds. My retort is that Like Minds was aimed at a wide range of skill sets, and had four keynotes to provide value to the range of expertise in the room. Having said that, we’re still working hard at making sure in February we deliver unquestionable value – a conversation you can follow some of over in the comments section at this post on Carl Haggerty’s blog.

Getting back to the issue of the same-old same-old content, I’m not addressing this to Jeff, and the other event organisers around the world – although, being one of these organisers with Like Minds, we must play the part of prioritising the following when we shortlist speakers – I am writing this to the speakers and bloggers themselves who are sharing their insights at these events:

We don’t need to hear another tale of why Twitter changed your world, or why Facebook is such a big deal. We don’t need another ‘Twitter is great because’ speech, or just endless waffle on projects. We need actionable, thought-through, clear frameworks that can be taken away and used by businesses, individuals and organisations. That’s value. That’s sharing stuff that helps. That’s actually thinking your content through and presenting it in a way that helps others, as opposed to just promoting your own Social Media awesomeness.

I think I’m leading the way forward here by example. I spend a lot of time providing frameworks that you can take away. Here’s the ones from last month:

Now I know they aren’t the best on the web by any means, but at least I’m taking my experience and turning it into clear, actionable content that anyone can come and take away, as opposed to just meandering and presenting the same old waffle or paediatric approaches. Then I see the stuff that passes for ‘quality’ on Mashable and SmartBrief and I wonder why I bother: they’re just filled with more of the same-old same-old. Seriously: I see so few creating clear content.

Anyway. Will I get criticised for talking this way? Yeah, probably. But guaranteed the ones who do are themselves not attempting to provide value in this way.

By the way, I’ll be presenting some of this content with Olivier Blanchard, along with lots of new frameworks that we’ve been working on, next week in Exeter on December 3rd, and then in London on December 4th. They will be well worth it.