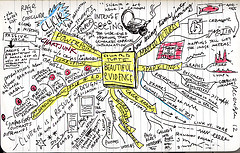 When I started out as a consultant two years ago, I had some proof, but it wasn’t clearly documented. The first thing to do is certainly to produce proof (and once you have, that doesn’t separate you from most), but actually producing that proof in a way that someone get’s it is hard work. Many of us have successes, but still there isn’t the knowledge of those successes that we’d like.

I think the thing with proof is that one man’s proof is not another man’s proof. I was talking to a friend the other day and offering some insights in their business. Whilst they are greatly respected, no one really knows exactly what this person does and therefore doesn’t purchase or promote their services. To him, there was proof, but to others, there wasn’t.

Michael Meyers, my pastor, and I were talking the other day and he made the exceptional observation that everything you say before the event is an intangible. It’s only after the event that you have something tangible. That is sooo good – because don’t just all of us focus on before the event, rather than after the event? “I can do this, we will have this, we have got this going on, I am able to deliver this for you,” etc, etc – but this is all intangible speak. Rather we should be saying “I have produced this. I have done this. We have made this happen. Do you want it too?”

This is why my friend saw they had proof but others hadn’t. He’d seen what he’d done before – the tangible parts – but he couldn’t communicate it in a tangible way.

Michael went on to say two further things which illustrate what you need to do, which I thought were gold:

1. Pick up the proof

After you’ve done it – after the event – you have to pick up the bits that prove you did it. The testimonies, the videos, the reviews, the blogs, the Facebook comments and the best tweets.

I’ll be honest, this is something I’m bad at because I’m exhausted after the event. His tip is to introduce a team of people whose sole responsibility is post-event PR. I’ll be giving it a go over the coming months, so I’ll let you know how it goes.

Once you’ve picked it up, you need to publish it. This is where Social Channels help. Scatter that proof, baby. Have it on YouTube, the blog, the static pages, on Flickr, on Twitter, on Facebook. Make sure every channel has proof – because people are always looking at various channels and might never see the whole picture.